On: May 23Author: Sam AndersonCategories: Blog No Comments

Wow! What a great race this was! I got a free entry into this for winning the Grafham Olympic Race last year and was really excited to race some really good competition.  The weather was perfect and I was really looking forward to getting underway! I must confess that my enthusiasm quickly faded when I got in the freezing river (it was never 12 degrees!) and it was so muddy and dark that the minute your head was under water you couldn’t see a thing! My new goggles were just as useless and were so tight that I couldn’t actually open my left eye. Anyway, I knew if I was going to be up there in the race that I needed a good swim. In previous years the 750m swim has taken me 13-14 minutes and has always been a major weakness (and where I have always lost so much time to Michelle in previous races) but I was over the moon to swim a sub 12 and get out of the water in 6th place. Swimming down and then back up the river actually made for a lovely swim and was a lot easier than the 1500m swim in the race last fortnight!

T2 was a bit of a nightmare as transition was literally a few strides away from the waters edge so I suddenly found myself next to my bike and hadn’t even started taking my wetsuit off. I had a bit of a fight with it before doing quite possibly the slowest mount ever! Out of transition there was a left hand turn to go round the roundabout before coming back on yourself. As I was turning left out of transition I saw Michelle & Louise on the other side of the road so reckoned I was about 40 seconds down. I quickly overtook 2 girls and then worked really hard. I could see Louise in the distance and slowly but surely made more and more ground on her. When I eventually overtook her I must have had that “great you can relax now” sort of moment as she came straight back past me! I didn’t let her stay ahead of me for long before closing her down again and then she came back at me. It was really great fun as every time I thought I had dropped her she appeared from nowhere! As we picked off the men one by one, one of the guys went absolutely mad cheering for us that we were 2nd and 3rd female.  It was all rather exciting!

Louise and I came back into transition about 3 seconds apart.  The chip times are slightly inaccurate as I had the fastest bike split of the day ~ not that I’m complaining as it makes my T2 time look awesome (which it wasn’t!) As Louise shouted a “well done” to me and ran off into the distance I was still faffing about with the tongue in my trainer trying to pull it up. My feet were like blocks of ice so I couldn’t really slam my foot into my trainer and I was still messing about with it when the commentator announced that the second female had  left transition so I gave up on rearranging my shoe and just got on with it.

I ran really hard out of T2 and someone shouted to me “don’t blow up” but I think I was on a mission to make up for lost ground before settling into a rhythm.  Louise was running really well but not quite as possessed as me (and it’s always easier chasing someone down) so I caught her quite quickly. I planned to get into a rhythm at that stage but 2 things happened, first of all she slipped on a rock or pothole or seemed to lose her balance and I shouted if she was OK and assumed she would continue behind. Second of all I could now for the first time in a long time see Michelle and wanted to push on for first.

It is worth pointing out here that after all the disappointment of Holland and all the hospital trips and scans that I was finally running pain free. I was waiting for the cramps or a stitch or something to come….but it never came, and I think I was just so happy to be running like normal that that also spurred me on. I caught Michelle before the end of the first lap which meant I could just enjoy the final lap….which is what I did! The cheering and crowd were amazing. Chris was cheering like it was the Olympic final! The course over bridges and footpaths and by the river was brilliant! I relaxed and carried on picking off the men (and actually enjoyed the run!) to cross the line with a 19:51 5k, finishing 1st female (14th with the men) in 1:13:48, over a minute clear of 2nd place.  All the races I have won before have involved a good swim and bike and hanging on in the run – so there was a great feeling about working on the run to take the win in this race.  Unfortunately Louise didn’t actually finish the race which was such a shame as she deserved to be on the podium and was running really well but I spoke to her at the presentations and hopefully with some ice and rest she can get it sorted ready for the Europeans (if you read this Louise it was lovely to meet you!)

As soon as I crossed the line Chris and I had to dash back to our B&B to pack and check out but ended up having egg on toast cooked by the lovely Fleur so didn’t actually see everyone else finish (If you are ever vising St Neots this place is well worth a stay www.thewhitehouseguesthouse.com). We made it back in time for the presentation and to see some of the final women coming in, by which point it was really quite hot and they had to work pretty hard!  Well done to everyone who raced, including all my tri friends and people who’s first triathlon it was.  I have probably raced close to 50 triathlons and duathlons now, both in the UK and abroad and I can honestly hand on heart say, that the Nice Tri Events are some of the best events I have ever taken part in.  I would recommend their races to anyone – whatever ability, the marshals, courses and atmospheres are always fab! To find out more you can go to www.nicetri.co.uk 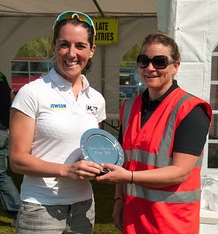