Well I have massively struggled to stay motivated this month and have tried everything and anything to get that spring back in my step. Things have been done without enthusiasm recently which is so unlike me! At first I tried to get inspired again by buying new kit but when my cycle shoes arrived and were too small and then a new swimming cossy came that was for the size of a 6 year old I still wasn’t feeling the love for training (although today my new Nike Frees arrived from Hong Kong although I think they might be fake! Haha! Typical!)

My next attempt was to persevere and make training even harder and come out the other side but when I set off for my 3 hour ride last Sunday and turned around after just 15 minutes to head back home I knew that wasn’t going to work! Last week I put my costume on to swim at 6am and then got back into bed still in my cossy (sexy!) as I reeeally didn’t want to swim! I bought a new Ipod to replace the one I lost (I sound like I’ve won the lottery recently!) but even being reunited with my Scouse House wasn’t enough. I booked in to see Jai at Total Immersion to learn new things and whilst that was absolutely fabulous (see his services here) I still didn’t feel like running and cycling.  So feeling uninspired, unfit, lazy, lethargic and pretty darn useless I did what most normal people would do…..entered a race!

I chose an Olympic Distance one close to home as I’m not so good at that distance so there was no pressure or expectation.  I was also competing against my friend Anna, other half Chris and Chris’ cousin Phil who formed a pretty impressive relay team and so I thought it would be a good laugh to go and take them on!  We also had my mum, Chris’s mum and dad, Anna’s friend and my friend Simon from work to come and watch!

It was quite a small event and quite different to all the other ones I’ve done this year – the main difference being that there was no sunshine! And it wasn’t an afternoon start that I have become accustomed to! The swim was a non-wetsuit swim (whaat!? couldn’t believe it!) and Anna and I went head to head! I loved the swim (Jai can you believe that – see previous blogs, I hate swimming!) and was out the water first closely followed by Anna. On to the bike and I had no speed whatsoever. I had to borrow some wheels as the puncture I had tried to fix following the mid-week time trial had been unsuccessful and I seemed to be telling myself that my back wheel was rubbing on my frame. I was trying to look down to see but nope, it wasn’t rubbing, I was just that slow! The 42k cycle took me 1 hour 11! Shocking! I was hoping for at least a sub 1 hour 5! Chris flew past me as if I was stationary (he got the fastest bike split of course!). To be fair to myself it was blowing a gale and whichever way you turned you were cycling into a fierce headwind. Off onto the run and still in first place, I took on the 6 lap 10k! 6 laps!! How mentally tough is that! It was an off road run around the lake and quite twisty and bendy (and muddy at this point thanks to the torrential rain, my poor pink Nike trainers!) The little hill on lap one was like Mount Everest by lap 6 and my severe lack of mojo and run training definitely showed here. I ran a 41:05 and although I couldn’t run any quicker at the time I felt remarkably OK at the finish. 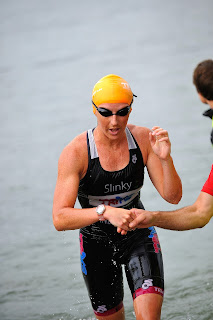 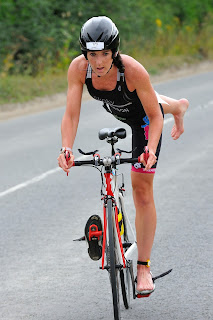 Phil had completed the dream team and ran a sub 35 10k!!! That is mightily impressive considering he runs once a year! So Anna, Chris and Phil had dominated the event by winning in fine style! I was excited to receive my first place prize after finishing in 2:18:50 but then realised there would be no prize giving as the results were to be merged with Saturday’s race and then prizes would be sent out.  How bizarre is that? Not only was it a bit of an anticlimax not being able to celebrate and cheer on others getting their prizes but the weather and conditions from Saturday to Sunday couldn’t be more different. So it turns out I didn’t win after all as there was a faster athlete called Leanne from the day before. It would have been good to go head to head with Leanne in a proper race on the same day as the only time we have raced before at the British Champs I held on for the win and I thrive on being tested to the line. Being the good sport that I am though I will still accept my 2nd place plaque in the post (but will still tell everyone else I won! Haha!) Nevertheless the race helped me get my love for exercising back – it was good just getting out and racing again, being with my friends and family and proving to myself that I’m not the unfit slug I seem to think I am!

So what next to get back on track? A rest! There’s no point fighting it, if I want to rest, I’ll rest.  On Friday it will be 5 weeks exactly till RACE DAY in London (woop!) so I will start back then and really keep my eyes on the prize (although what prize I’m not sure!).  In the mean time I’d really like to say a massive GOOD LUCK to my friends who are heading out to Canada for the World Duathlon Champs! I hope you all achieve what you have your hearts set on and enjoy the journey and experience along the way.  I’d also like to say a big GOOD LUCK to my nephew Henry who is doing his first ever triathlon on Saturday. He’s only 8 and is raising money for the British Triathlon Foundation which aims to encourage children to keep fit, active and healthy through triathlon and also improve their confidence, self-esteem and social skills. Please sponsor him just a quid or two here: If he wins his event or raises enough money he will be able to race in London on the same course as the Olympics was on (but obviously not that distance!!!) which would be a dream come true to him! Thanks All…..Happy training!