An early start in the morning and I got to do what I do best…..talk! It was lovely seeing everyone and it took me about 2 hours to rack my bike as I kept getting distracted. I’d like to point out at this point I wasn’t eating a burger…..it was just the bread (honest!).  Once I was racked it was wetsuit on, goggles on, say good luck to everyone, including Suzie who waves me off….”errr, Suze aren’t you racing?!” and off we go to the beach start. With 30 seconds to go Suzie and I are absolutely in the zone, indicated by the picture below! 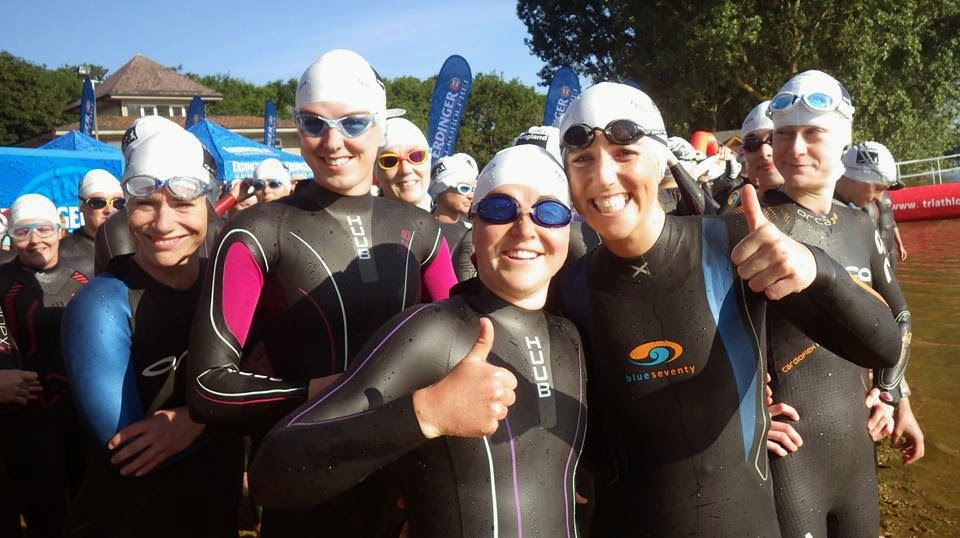 The hooter went and off we ran into the lake and I stood on the biggest, sharpest rock in the world that took my breath away. Ouch! I pretty much thought about the pain in my foot all the way to the first buoy until the girl I was drafting off did this fancy back stroke turn around the buoy and I thought “ooh er, that was good!” (she did it at every buoy and every time I was impressed as I breast-stroked round!).  On the last straight we started to weave in and out of the older men from the wave before and I got a couple of kicks in the stomach but other than that I loved the swim! It was clear, relaxed, calm. I wondered at times if I should push on but settled in a small pack of four and as the marshall pulled me out of the water he said “Well done, you’re 7th lady!” WOW!

Off on the bike to take on the Rutland Ripple! I had great company in the form of Claire Shea-Shimmonds who dropped me on every climb, but then I would real her back in and over take her on the flats.  The bike was pretty uneventful and at times pretty lonely.  I knew I was cycling below par but just had to give a measured effort and had somehow moved up to 5th place.  I’m hoping there is a lot more to come on the bike now that I can start training again; it used to be a real strength last year so maybe I can start getting some form back?  A minor panic in T1 when I completely couldn’t find where I was supposed to rack my bike (I had run down the wrong row!) and then I was off again on the run. I just had to relax on the run.

I held on to 5th place all the way until 7k which was a big surprise to me.  Sarah Lewis flew past but  I was still third in my Age Group, which I had been right from the word go and at 9.5k I just started to think that I might just hold on for the National Bronze Medal when the lovely Ali Moult went past and gave me a huge cheer. She had run so well to hunt me down from over a 4 minute deficit starting the run and she completed the podium for our Age Group along with Lucy Nell and Suzie Richards (who also finished first and second overall), well done girls!

After the race I was really disappointed to lose 2 places with just 500m to go, finishing 8th overall and 4th in my Age Group. But I was fastest of the non-medallists, which is a bit like winning the B race, and in my primary school years I’d have done anything to win the B race!

We stayed to cheer all the girls on who got their medals before making our way home.  It was great to see Suzie and Ali up on the podium, Jacqui also conquered her Age Group again winning the gold medal – she is just amazing, and Claire who I had been twoing and froing with on the bike had won her Age Group. Well done to all!

In the car I spoke to Mum and Chris about my disappointments and they were both super encouraging (as they always are), and helped put some perspective on it.  All things considered (i.e. illness and lack of training) I had done my absolute best, which is all you can do.  I’m slowly starting to get a bit of form back and I am super encouraged by the support from my friends; people seem to genuinely want me to do well and that means a lot!  Thank you! Also, it turns out that I got the first qualifying slot in the 30-34 Age Group for next years Europeans in Geneva which was a nice surprise!So, had I challenged myself? Absolutely! I had massively stepped out of my comfort zone! And had I enjoyed it? Yes! I loved the swim, enjoyed the bike, loved the course and most of all, enjoyed seeing so many friends from across the UK. The event was amazing, the organisation was fantastic and I would definitely go back again!

Results – Age Group (4th out of 23), Overall (7th out of 195 finishers) – full results can be found here: http://www.pacesetterevents.com/dambuster-triathlon-live.phpThanks for reading and happy training! 🙂